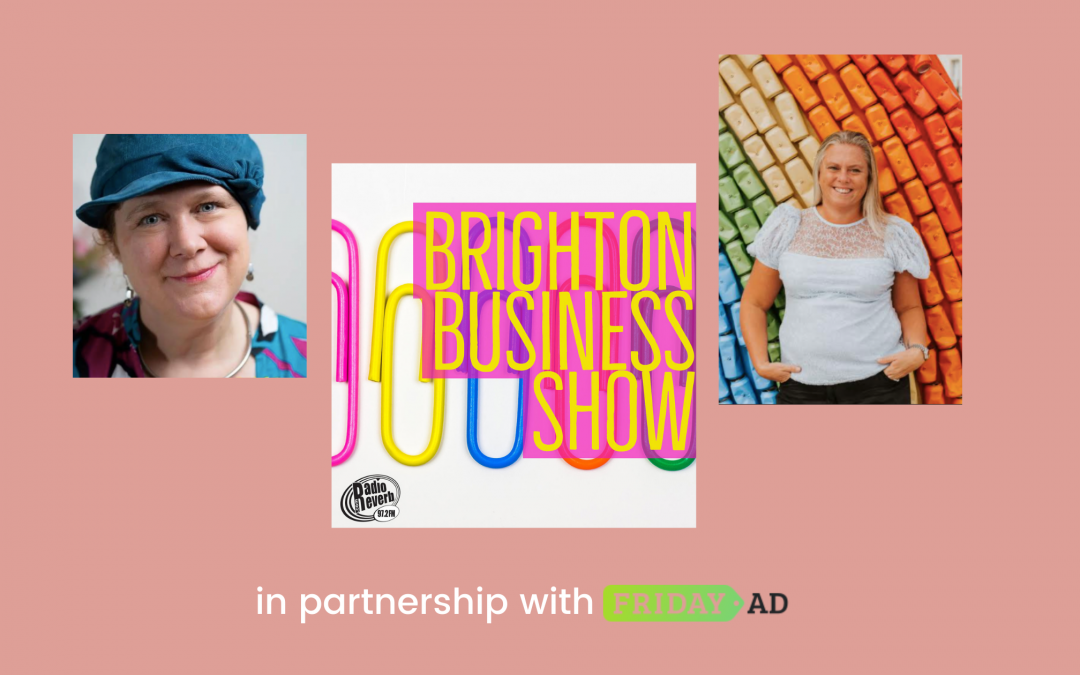 The fascinating stories of two Sussex based ‘one man band’ wedding businesses.. An LGBT Wedding Planner and a Celebrant.

Were in June and were all expecting that the lockdown would come to an end. But it’s not quite over..

Not fully lifting, what does that mean? All sorts of questions come up.

In this months ‘Brighton Business Show’ partnered with Friday-Ad Lisa Moore and Helen Packam interviewed two local wedding services who talked about how the current situation has affected the industry, how they started out as well as giving their advice for anyone looking to start a career in weddings and events.

The first guest on the show was Tanya Russel, a  Wedding Event planner and floral designer.  Tanyas journey with weddings started a long time ago. She first started out over a decade ago where she worked as PA for a consulate for the Cyprian embassy where she got to know a lot about the diplomats. Started doing dinners for the embassy then went on to plan weddings for the diplomatic community. When she became a single mum, she decided to give it up and moved back to England. Tanya, undertook a diploma in wedding planning. She told the show how her passion is providing for the LGBTQ community, which she described as very unique still. “To this day, not many providers are able to help with those types of weddings. My job is helping couples come to suppliers to a safe place (who can be non inclusive). They don’t know who to approach.” She goes on to tell us the issues same sex couples still face in this day and age when it comes to getting married.

The current situation is you’re allowed more than 30 guests but have to have 6 people at a table. Risk assessment, Table service. No dancing inside. Music is allowed. Couples are allowed the first dance, Tanya explained.

She ended the interview by telling us the wedding entrances that have stuck in her mind during her work and gives her advice to other businesses started out in the wedding industry. She predicts next year will be crazy for wedding services!

Do you have a wedding or events business?

The second speaker on the show was Alexandra Harrison. She works as a celebrant for weddings. This is somebody who conducts a formal ceremony in a way that ‘tells their story’.

She describes how the most important part of her role is to ‘set the scene’, Her job to ‘capture the essence’ of what the couple are about in order to portray their story.

Alex started her job as a celebrant in 2017. As a youngster she spent many years travelling around with her parents. She describes how this was what fed her interest in other people with her parents having an ‘open house philosophy’, she got to constantly hear lots of different stories and embrace new cultures.

Alex described how she has had many different jobs throughout her life. Her first job was being a zookeeper. Out of all her jobs, she mostly liked working with people and presenting to others. She went to a funeral where it was led by a celebrant. She was unimpressed by the ‘text book’ feel of it. A couple of people said to her afterwards “Alex you’d be good at that” which stuck with her in her head.

Shortly afterwards she realised her job was unfulfilling for her and it was time to make a change. She decided to make the jump to train as a celebrant. She goes on to tell us the most interesting ceremonies she has witnessed. For anyone interested in having Alex work with them for their ceremony feel free to visit her website to find out more about how she can help you on the special day.

If you’re starting a similar business, We’re always here to support you through your journey too!

If you want your business to be featured on the next show? Get in touch now: hi@friday-ad.co.uk